Yesterday, on Facebook, I put up this image above showing a COCOCOZY Gate cotton knit throw on a chair in my tiny tiny little cottage in the Hollywood Hills…I posted it on Facebook just to say “Happy Sunday!” to the tens of thousands who follow along on COCOCOZY Facebook. Readers on Facebook had lots of nice things to say about this little corner in my house. One reader correctly noted that the orchid is sitting a little too low in the pot on the coffee table…I agree!

The same reader was curious about the brown trellis thing on the chair. I don’t think she thought it was a throw at first. She asked whether I was using the “it” on the chair to protect the chair from getting dirty or for a dash of interest. I responded…that it is a knit throw from the COCOCOZY textiles collection that I designed and I was using it for a dash of interest of course. I don’t think she had seen a throw used like this before…draped right down the middle of a chair and then tucked in (I must give credit here…my friend Candice Scott is the one who came up with this look for COCOCOZY throws last year during our first photo shoot)

I love the idea of using the throw like a decorative pillow…neatly tucked but providing a bit of texture and color.  Hence I manufacture my own throw designs now!

Well the Facebook reader’s question and curiosity over the way I threw my throw got me to thinking…what are the ways to throw a throw?

5 WAYS TO THROW A THROW

1. THE LADY LIKE CROSS – Fold the throw so it is about 1/3 of its normal width.  Lay it across the back corner of the chair and let it gently drape on a slight diagonal over the seat of the chair.  Fold the bottom over for a little feminine touch. (below) 2. THE SIDE WAYS SLING – This is more dramatic than the Lady Like Cross.  Fold the throw in half length wise and then fold it in half again so it is about a quarter of its normal width.  Then drape at a complete diagonal from the back of the chair all the way across the seat.  Open up the ends of the throw if it is reversible give a more casual look and show off the other side. (below) 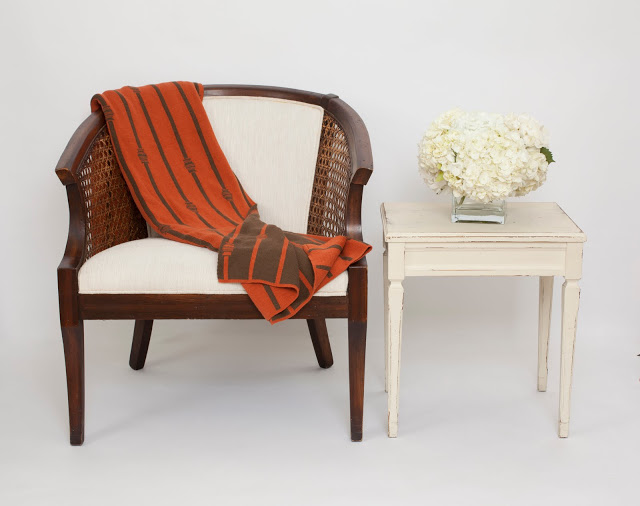 3. THE OVER THE ARM FOLD – Take throw fold in half length and then half again.  Then turn and fold in half the other way.  Basically you want the throw to be folded into a rectangle of sorts. Simply toss over the arm of your armchair or sofa. (below) 2. THE WATERFALL – Fold the throw in half…about a third of the way down the throw bunch it together and place at the back of the arm on a chair or sofa…then fan out the rest of the throw across the seat to create a waterfall like look. (below) 5. THE TAILORED TUCK – This has turned into a signature look for COCOCOZY Throws.  Start standing up with the throw completely unfolded.  Hold your arms out with the throw in each hand…then fold so top ends are touching or are slightly overlapping.  This will give you a long wide envelope of sorts.  Take the throw…place down the middle of the chair and then neatly tuck the bottom of the throw under the seat cushion and voila! (below) Which look is your favorite? Any other ideas on how to throw a throw?  Please do tell!

P.S. Scheduled last minute COCOCOZY home furnishings collection photo shoot with fab photographer Hugh Hamilton on Friday…we shot on Saturday night into the wee hours.  Talk about tight turn around…schedule photo shoot on Friday, shoot on Saturday….samples weren’t even done when I scheduled the shoot…and if you could have seen me on Saturday running around like a chicken with no head (I like saying a chicken with no head instead of chicken with its head cut off…feels a little more crazy for a chicken to be running around with no head for no reason…) you would have chuckled I think. Anyhoooo…I’m liking the new COCOCOZY offerings – new textile designs and new products coming out in 2012.  I can’t wait to tell you about them and show you what I’ve designed next! Hugh has been my photographer of choice for shooting the COCOCOZY Collection…he shot all of the product photos above earlier this year on previous photo shoots.   Hugh doesn’t normally shoot pillows and throws…normally he shoots rock stars, celebrities and more.  While I was at Hugh’s studio/garage on Saturday night…Hugh showed me some amazing photos he shot of the 80/90s grunge rock band Soundgarden in New Orleans a few months ago.  Hugh said he only had a half hour to shoot this mega rock band down in New Orleans…the photos are amazing…they are for the cover of some big international magazine.  I’d like to point out how appreciative I am that Hugh is patient with me…it took Hugh and I  4.5 hours to shoot COCOCOZY offerings as I agonized over whether something was folded just right or placed just so but it only took a half an hour with a rock band…hmmmm…home furnishings are more temperamental than rock stars it seems…amazing!

P.P.S. Still feel like I’m coming down with a cold…hmmm…no time to be sick in the next two months.  So I’m not getting sick. Power of positve thinking in overdrive on this cold issue.  I am not sick.  I am feeling great.  Feeling fantastic.  Woohooo!!!

P.P.P.S. Put together wardrobe for my COCOCOZY collection related business meetings in Atlanta and North Carolina this week…need to look cute but professional but stylish but cute…hmmm…trying to figure out how to do something different than my black Prada dress uniform, black tights and black Louboutin heels.  Think I might a little checkered shirt into the mix…I know it sounds weird…but maybe I’ll take a photo of what I’m thinking and get your thoughts.

P.P.P.P.S. Okay…I’ll stop after this one…but some exciting news…I’ve asked a very stylish person to try out a guest blog for me on fashion….keeping fingers crossed that it works out!